Back around the turn of the millennium, Japan was coming up with some highly innovative practices and technology in the realms of science and engineering. The Canadian government decided that sending some of the country’s best and brightest college and university students there for a look-see would be a brilliant idea.

What’s now known as the Canada-Japan Co-op Program (CJCP) started up in 1991 and sent out its first cohort the following year. Along the way, the program went national and brought many of the country’s finest universities and colleges to the fold. The University of British Columbia (UBC) has been running the program since 2005. It also does all the monitoring and assessment during and at the end of the work term for students.

Three decades on, the CJCP has sent over twelve hundred students to Japan from every corner of Canada. The majority have been from the STEM disciplines—science, technology, engineering and math—with a small but consistent scattering of students from other disciplines like business, the social sciences and humanities, have gained experience too.

“One reason the program has endured is that it’s a great value proposition for Japanese employers,” says Julie Walchli, one of the program’s co-directors. “They can come to one place to reach some of Canada’s strongest post-secondary students, and all they have to do to start the conversation is tell us what they need.” Program coordinator Yuko Nemoto provides bilingual support to Japanese partners.

Interested Japanese firms then send along a job posting that outlines the skills they’re seeking. The usual interval for these paid internships ranges from a minimum of four months up to a year. “We’ll set up interviews by phone, Zoom, Microsoft Teams or whatever, and they can decide if there’s someone they’d like to bring on,” Walchli says. “That interaction helps the students as well to know if the experience would be a fit for them.”

Getting with the Program

Students in the co-op program at their home institution do multiple work terms prior to graduation. After doing one locally, they’re eligible for the Japan program.

“Their home school has to assess them to determine if they’re ready to take on the challenges of living and working in another country, culture and language,” Walchli says. “Then we do a language assessment and decide who’ll be in the program.” The successful candidates can then apply for the jobs posted.

“One of the program’s distinguishing features is that we do a weeklong pre-employment training session,” Walchli points out. “We have several modules to help them make a smooth transition to being in Japan, particularly in Japanese workplaces. Pre-COVID, the students all came to UBC for this.”

That training touches on things like Japanese workplace expectations, essential aspects of Japanese culture, and living in Japan. There’s also a module on intercultural communication. Every day features a business Japanese module with Japanese-language teachers. UBC puts all this together.

“Some students are quite advanced in their language skills already, but most of them say they wish they’d had more Japanese-language background when they come back,” Walchli notes.

In this precarious phase of the COVID pandemic, all of the pre-departure training has been shifted online. The new cohort, however, will do a combination of synchronous and asynchronous learning.

“We also invite alumni who’ve gone through the program to come and facilitate,” says Walchli. “Students have a chance to learn from those that have gone before them, and we have lunches and dinners with the students and alumni with plenty of frank conversations.”

Since some Japanese firms such as Rakuten will bring on more than one student, another thing they do during training week is to have these “sub-cohorts” work on a project together. “They research the company, and on the last day of training week they present to the whole group about their employer, including what the employer does and what they’re going to be doing there,” Walchli explains. 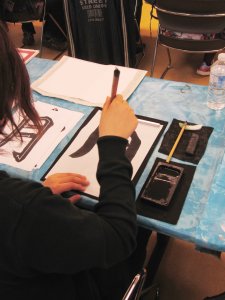 According to Walchli, the main motivation for students to enter the program is a passion for Japan, such as growing up reading manga, watching anime or liking Japanese food.

“The second thing is knowing they’ll be able to gain professional experience they couldn’t if they just stayed in Canada,” she reports. “It’s one thing to go to another country on an academic exchange or study program. Actually living and working there in a regular workplace is totally different.”

Walchli adds that they know anecdotally that many of the students return to their employers in Japan after graduation or go to another organization that they encountered. Some program alumni also choose to pursue a master’s degree in Japan after their experience with Japanese industry, and many of them reportedly receive scholarship funding from the Japanese government.

“Even among the students that don’t return to Japan after they graduate, many say that their experience in Japan is what sets them apart in their job search within Canada,” she adds. “They’ve been able to leverage their work in Japan to build a career in Canada.”

Another prime perk is that all these positions—short term though they may be—are paid. The compensation packages typically include room and board, sometimes in company housing, in addition to the salary.

When Walchli and the other program organizers began looking at the feasibility of expanding the program to include more business, arts and tourism students, they decided to do some research first. They sent a survey out to employers in Japan, with help from their partners at the Canadian Chamber of Commerce, and the Trade Commission service at the Tokyo Embassy.

“We got to hear from a lot of organizations we didn’t know as well as from our existing employers,” Walchli says. “When we asked about the main reasons they hire, number one was to diversify their workplaces and bring in people from different countries and language backgrounds to enrich the local staff. That wasn’t the answer I was expecting—I thought they would focus more on the skill sets and the work the students did. The latter were certainly reasons, though.

“The number one benefit for our employers is that these students bring energy and perspectives and backgrounds that are different from most of their long-term employees,” she continues. “That kind of cultural exchange is hugely valuable to them.”

The second top reason: it allowed the organizations to expand their own networks in Canada, and in some cases to build relationships with the universities the students come from and researchers at those universities.

Walchli gave an eagle-vision perspective of the whole co-op phenomenon that the CJCP embodies.

“Canada is a world leader in cooperative education, and this form of learning, where students are going back and forth between school and work multiple times, is common at most Canadian universities and colleges,” she notes. “Canada also has the only national accreditation model in the world for co-op. We’re building on an incredible legacy of co-operative education that has existed in Canada for well over five decades now at most schools. So whether the students are in Japan or in Canada, it’s a very powerful way for them to learn.”

For more details about the CJCP, please visit the program’s website: https://thecoopjapanprogram.com/.