I am chair of the Canadian Chamber of Commerce in Japan’s External Relations Committee, and a corporate lawyer at Kojima Law Offices in Tokyo. I thought I would share with chamber members a little about the reasons I go cycling, what is involved and my tours this year over 2,000 kilometres — solo — across Japan, between Fukuoka and Aomori.

There are four reasons I do solo multiday cycling tours.

First, the meaning of life on a normal day is a pretty complex question, but life on a bike is just waking up in the morning with a direction to follow. I find that simplicity, for a few days, better for my headspace than any beach or ski vacation.

The second reason is health. I can’t punish and test myself like this on a regular basis, but I want my body to remember that such tests may still occur from time to time.

Third, doing these tours is educational. Now, dozens of Japanese towns and prefectures that meant nothing to me last year have a multitude of meanings. I understand the Great Wall of Japan in Tohoku better than I ever could have otherwise; coworkers’ trips to Shikoku have meaning; the tech boom in Fukuoka places a real location in my mind; and I can swoon with clients over the taste of beef tongue in Sendai.

Finally, the tours build mental toughness. There will be a lot of irregular problems that you can’t handle on a solo multiday tour. For each day of an extended cycling trip this year, I had only about a four-in-five chance of doing the ride as I had planned it. At times that was due to physical exhaustion and fading sunlight. Once it was because of mechanical breakdowns, once because of overwhelming weather and once because cyclists still aren’t permitted anywhere on the roads around the Fukushima Daiichi Nuclear Power Plant.

Even when things go according to plan, thoughts always return to rerouting and backup options should anything go wrong. We spend most hours of our lives in comfortable temperatures, eating on a whim, sitting in soft chairs and travelling paths without risk. But successfully being able to explore how to operate at the edges of failure is what one must be most grateful for on these trips. 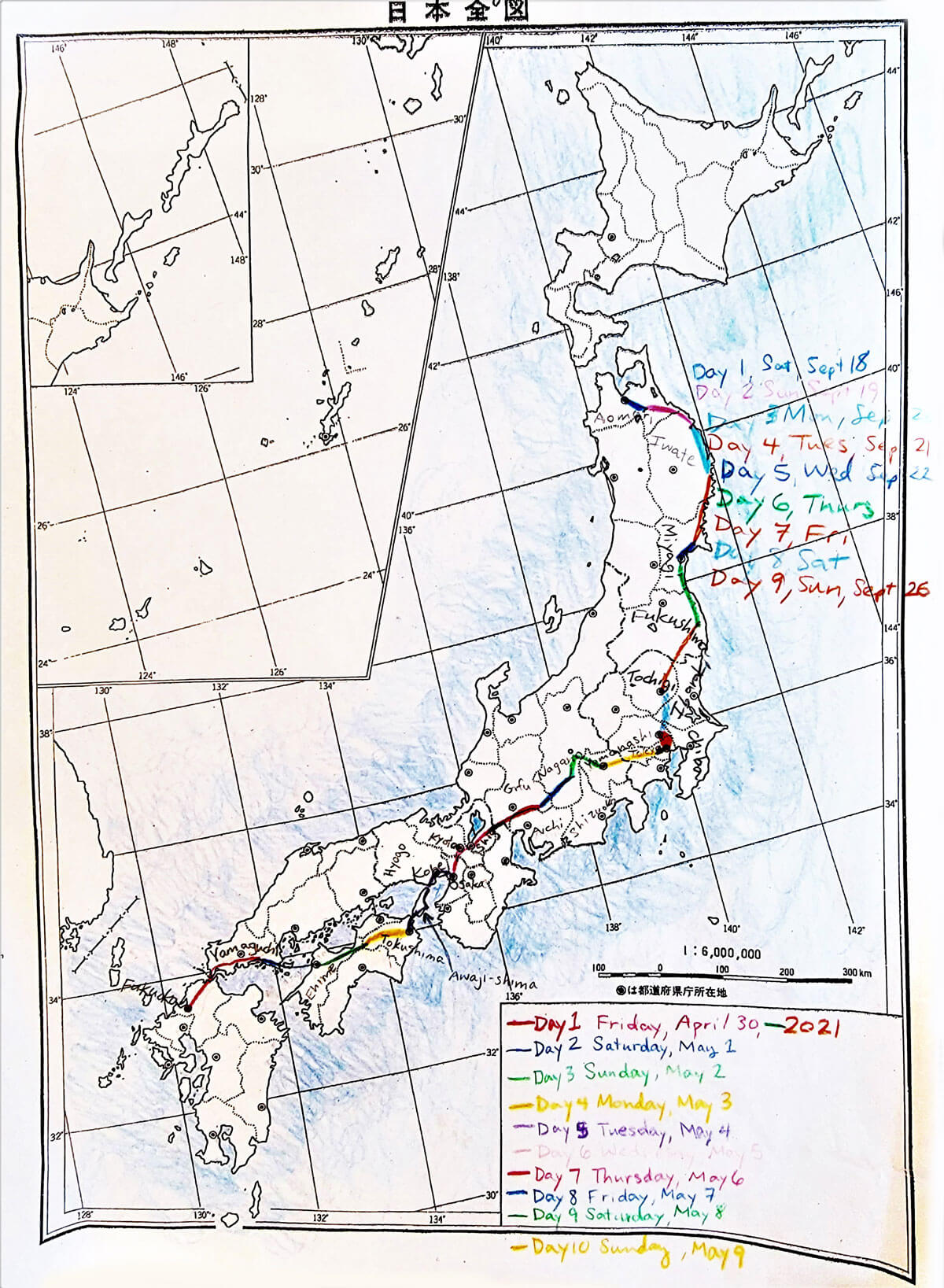 Logistically, where should you go? Why travel from Fukuoka to Aomori? There’s no correct answer to this question. There are thousands of kilometres of beautiful cycling routes in Japan, but they aren’t in any particular location or in a straight line. If you prefer days away instead of weeks, coastlines or mountains, family-friendly infrastructure or lonely logging roads, follow those tastes without hesitation.

Japan Cycling Navigator is an active Facebook group where you can test ideas. If it’s your first time, a long river route is usually rewarding. Along the sea, the 60-kilometre Shimanami Kaido, connects Shikoku to the main island of Honshu via six islands. The tour is a few days of magic.

I prefer sweeping through as many places as I can and not knowing very much about where I’ll be. This year, because I spend most of my time around Tokyo, I wanted a broad experience to learn about as much of Japan as possible. So, wanting to start in the middle of the country and not having a lot of consecutive vacation options, I decided to rely on the two parts of the calendar thickest with national holidays: Golden Week (April 30–May 9) and Silver Week (September 18–26).

There are thousands of kilometres of beautiful cycling routes in Japan, but they aren’t in any particular location or in a straight line.

In spring I bagged my bike, rode a Shinkansen out to Fukuoka in Kyushu and cycled back to central Tokyo on a more or less direct route. In late summer I cycled back to Tokyo from the top of Tohoku, in the northeastern part of Japan’s main island.

To sleep, camping is great, but requires more gear, time and preparation. There are convenient ryokan and business hotels almost everywhere in Japan, so it’s quite easy to string together a chain of night stops from one location to another with an online booking site such as hotels.com.

Physically, I began the year able to cycle up local mountains and ride about 100 kilometres on a Saturday without significant aches and pains. That’s a baseline level of fitness that’s surprisingly achievable for a wide variety of people, and there are extremely generous cycling clubs around Tokyo such as Half Fast Cycling and Tokyo Cranks that will help with advice. The Knights in White Lycra (KIWL) have my special thanks for our amazing 2019 charity ride. 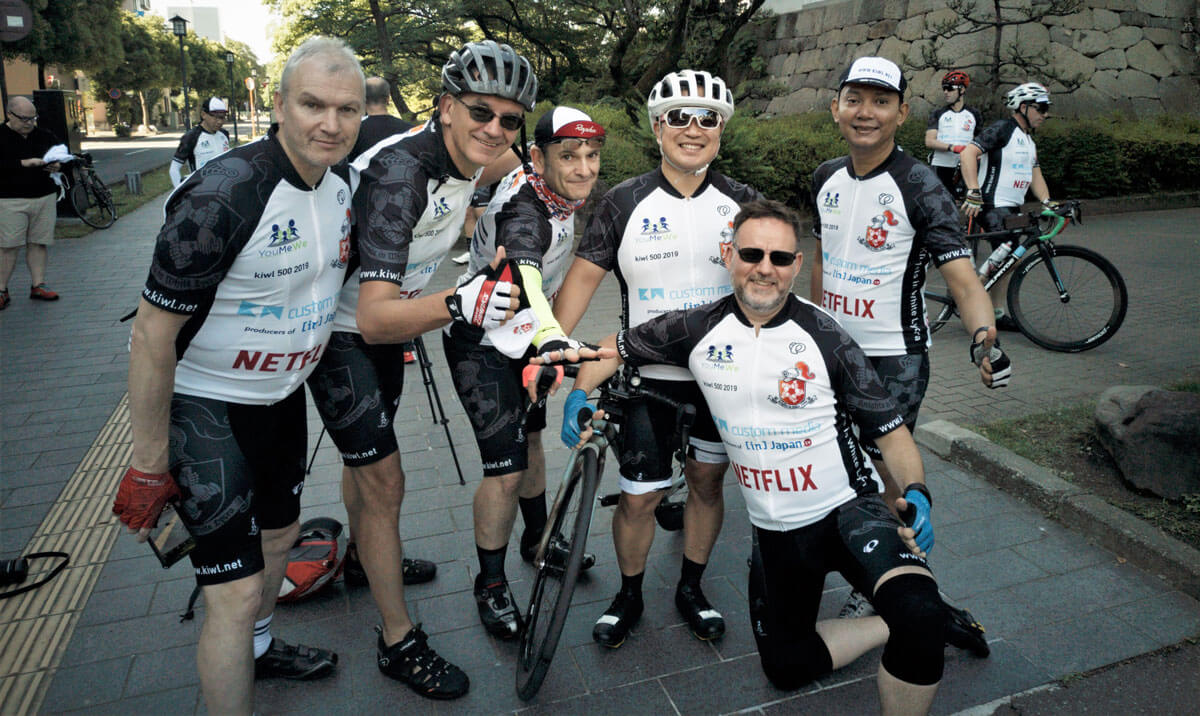 On my trips, the essential items have been:

For leisure, physical conditioning, learning and resilience, multiday solo cycling is unmatched. Feel free to send questions my way or keep in touch with your own lost and found stories from the road. I’ll see you at the next chamber event.