Are you any less Canadian for having lived six or 16 years in Japan? Stephen Harper seemed to think so, as his administration vigorously contested a 2011 court challenge to legislation that denied expatriates the right to vote after having lived abroad for five years.

Fight for the Right

Along with other measures to limit voting rights, Harper’s Conservative government beat back that challenge by Jamie Duong and Gillian Frank — two academics resident in the United States — with an Ontario Court of Appeal ruling that said: “Permitting all non-resident citizens to vote would allow them to participate in making laws that affect Canadian residents on a daily basis but have little to no practical consequence for their own daily lives. This would … undermine the legitimacy of the laws.”

Undaunted by defeat, Duong and Frank continued to lobby and lawyer until they caught the attention of the government of Prime Minister Justin Trudeau and got the Supreme Court to hear their case. The upshot: a double victory.

In December 2018 Parliament pa­ssed Bill C-76, extending the right to vote to any Canadian citizen over 18 who has lived in Canada at some point, regardless of how long they have lived outside the country or whether they intend to return. This abolished the sti­pulation in 1993 legislation that expats could not vote if they had resided outside Canada for more than five years. Why five years? As former Chief Electoral Officer Jean-Pierre Kingsley recently admitted, “the number was taken out of the air.” That’s what lawyers call “arbitrary.”

The second victory came weeks later with a 5-2 Supreme Court decision that Canadian citizens have the right to vote in federal el­ec­tions no matter how long they have lived outside the country. This sets the expat fran­chise in stone.

While some might call this “repre­sen­tation without taxation,” it puts Canada in the front ranks of jurisdictions that include all citizens in the democratic process, as opposed to those that actively inhibit voter registration. For long-term Canadian residents in Japan, this represents a major advance in our civil rights. But will our new freedom to vote have any impact on Canadian politics?

Canada’s diaspora comprises more than 2.8 million people — almost eight per cent of the nation’s citizenry. If it were a province, it would be the fifth-most populous after Alberta. Even so, Elections Canada does not expect much from us. Under the old five-year rule, only 11,000 expats voted in the last election. In the coming October federal vote, officials expect only a modest increase to 30,000 under the new rules.

Why so low? It’s not difficult to register as an expat voter (see next page). The real reason for pessimism is that the political parties don’t seem to have begun thinking about how to pull our votes. Combing the websites of all three major parties, I found not a single mention of expat Canadians.

Will our new freedom to vote have any impact on Canadian politics?

So, I emailed Julie Dabrusin, Liberal MP for my home riding, Toronto-Danforth. Rife with highly mobile film and financial types, and Greek seniors who retire to the old country, Danforth is among the biggest expat home-base constituencies. As such, you might expect we were on the local MP’s radar. But when she finally replied all she said was, “I am happy to hear that you are pleased with the changes made to our Elections Act which allows Ca­na­dians living abroad to vote.” No offer of help registering or even “I hope I can count on your support.”

Robin Sears, veteran political pundit — and Canadian Chamber of Commerce in Japan president back in the ‘90s when he was Agent-General [representative] for Ontario to Japan — said in a phone interview, “This is to­tally bizarre. They could at least blast emails out to their contacts asking, ‘If you know anyone living overseas, encourage them to register.’”

Contrast this with the United States. After Congress passed the Overseas Citizens Voting Rights Act in 1975, both parties built global vote-pulling organizations such as Democrats Abroad, with members in 190 countries and 41 “organized country committees.” 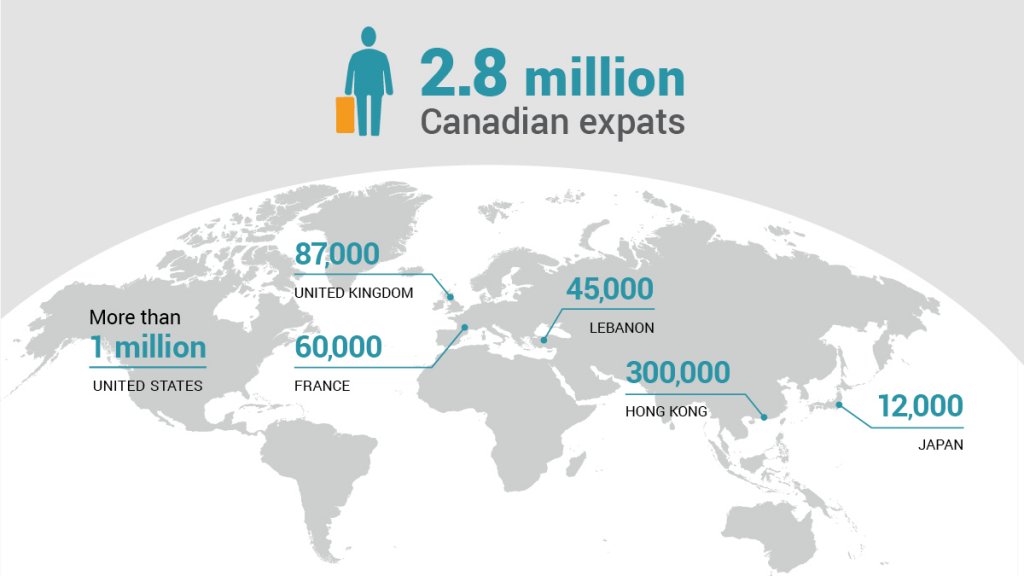 While Democrats Abroad has extended into dozens of countries in search of votes, a similar Canadian effort would not require nearly the same reach.

Although you find Canadians living in un­likely places, most of our 2.8 million expats are concentrated in a few countries. More than one million live in the United States. Hong Kong is second with 300,000 Canadian residents. But where most expats in the United States are Canada-born, most in Hong Kong are immigrants who returned home.

Third and fourth, the United Kingdom with 87,000 expats and France with 60,000 are, like the United States, mainly home to Canada-born expats. But with 45,000 Canadian ci­ti­zens, fifth place Lebanon is more akin to Hong Kong. Down the list at 12th is Japan with some 12,000 Canadians, mostly in the Tokyo area.

The bottom line: our diaspora is not so wi­de­ly dispersed. Most expats live in a handful of major glo­bal centers: Los Angeles, San Francisco, New York, London, Paris, Hong Kong, Beirut and Tokyo. Overall, according to a 2011 Asia Pacific Foundation report, 58 per cent of ex­pats are native-born Canadians — perhaps more likely to vote than those who spent the mini­mum time in Canada necessary to obtain a passport.

What’s more, by-and-large we’re not an idle lot. While scant data is available, clearly many Canadians have found niches in leading cities because they have valuable skills. And Sears, who headhunted senior execs across Asia after leaving government, says recruiters often favor Canadians over Americans or Europeans as more culturally adaptable. Adaptable or not, living overseas makes many of us more con­scious of our national identity, if only be­cause continually we must explain, “No, I’m not American. I am Canadian.”

Given all this, you might expect that Canada’s political parties would be lining up to woo us. Why not? As one Liberal insider who declined to be identified for this article told me, “Every par­ty in Canada is cash starved … there ain’t no money for this.” Whatever. If our new­found right to vote is to have any impact, it will be up to us.

On October 21, Canadian expats will have the opportunity to vote for the people that stole their votes — or some other party if so in­clined. But if your vote is to count, you need to register now to ensure you receive your mail-in ballot in time for it to reach Elec­tions Canada by October 15. Still, whoever you choose, here’s hoping that on election night TV commentators remark, “Elections Canada reports a surprisingly high turnout by Canadians in Japan.” 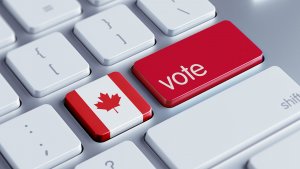 How to Register to Vote

On ElectionsCanada.ca find the page “Registration and Voting Processes for Canadians Who Live Abroad” and click the link at the top: “Apply to be on the International Register of Electors.” Click “Apply to vote by mail,” then “I am an elector residing abroad applying to vote by mail in future federal elections.” After a few questions, the next page explains how to establish an address in a specific riding. This can be your last Canadian address or the address of someone close to you. You need to specify the foreign address to which your mail-in ballot will be sent. You must also submit scans of your passport and Canadian birth certificate or citizenship card. Get those ready, and then click “Apply Online.” This takes you to the application form itself, which is fairly simple and includes links for uploading your scanned documents. Fill it out, press “Submit” and you’re done.