Simon and Martina Stawski are the duo behind the incredibly successful YouTube channel, Simon and Martina. The majority of their videos feature Japanese food and culture, and plenty of the couple’s wacky and engaging sense of humour.

The two Ontario natives (Simon is from Pickering, and Martina grew up in Etobicoke) actually got their start in South Korea, where they launched their channel in 2008. They started from very humble origins — making observations on South Korean food, culture and music — and gradually took off to great success. They had sponsorships, they founded their own studio and launched their own café and clothing line. But in the long run, they wanted to make the leap to Japan, and leap they did in January 2016. They’re now associated with the online entertainment studio Breaker, have more than one million subscribers and their videos regularly rack up hundreds of thousands of views.

We caught up with Simon and Martina to ask about one of the most impressive places they’ve been in Japan, the changing business of YouTube and the possibility of returning to Canada after many years of Internet stardom in Asia. 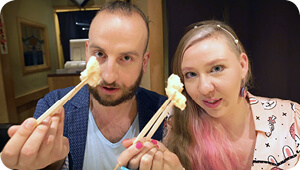 What is one interesting place you’ve visited in Japan?

We visited a Parma ham factory in Gifu with an amazing story. Many years ago, the owner of the factory tasted Parma ham for the first time during a company lunch in Tokyo. He quit his job very soon afterwards, and bought a ticket for Italy, in the hopes of learning how to make Parma ham himself. 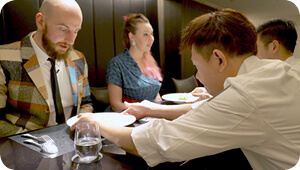 He spent 11 years there, until he learned the old ways. Then he moved back to Japan — to Gifu, and not to the heart of Gifu either, but to the mountains. Why? Because it had the right humidity and atmospheric pressure for making Parma ham.

We visited his place, where other restaurant owners were going to him and begging him to sell them his ham. He’s super selective about whom he sells it to, because there’s only so much he can make on his own.

Only two restaurants in Tokyo serve it, last we checked. And we got to hear his story, and to see the inner workings of his place. We know that, as a place, it isn’t really a showstopper, or a place that would be on any tourist map, or even one that might be a good answer for this question, but it’s the place that sticks out to us the most, and the story that continues to inspire us. His passion and dedication make us want to be better at what we do.

What have been the most significant changes that you’ve noticed in the industry?

The biggest change is that people are respecting — or at least understanding — YouTube a lot more. They’re not viewing YouTubers as only a bunch of weird freaks with quirky hobbies. There are legitimately talented and influential people using the platform now, with more influence than the celebrities and stars we grew up watching.

However, the legitimacy that YouTube has developed, and continues to develop, brings about a different side effect that we’re not too thrilled about. People are often starting their YouTube channels with the hopes of being rich and famous, and they’re frustrated when their dreams don’t come true.

Back in our day (we’re waving imaginary canes as we say this in old folks’ voices), we did not make videos because we wanted fame or fortune. We didn’t even think that was possible, because we never saw examples of it in other YouTubers’ channels. So, we just made videos because they were fun to make, and because we like making videos. But now there are many articles about how rich YouTubers are, the mansions they live in, and everybody now wants a piece of the pie. Sadly, that leads to a different kind of YouTuber than before, one with ulterior motives.

Has it become easier or harder to make a living as a YouTuber, and why?

In fact, the first two years that we made YouTube videos there was no Adsense [for content creators to place ads] program in South Korea so we made no money at all, but we still had a tremendous time, because we loved making videos. Once Adsense came to Asia, we were surprised to be able to make enough money to quit our jobs and to just focus on our passion for making movies. That was never the goal, though, but we’re not complaining now.

So this wasn’t a question of easier or harder for us. From one perspective, it’s easier to make videos now than ever before. Cameras have gotten so much better. Editing has become so much easier. Music has become so much more available. From our standpoint, this is the easiest time in history to make a living as a YouTuber. Even just from the numbers alone, there were more people making six- and seven-figure [dollar] salaries in 2018 on YouTube than ever before. The possibilities are there, but is the drive? That’s up to new creators to discover.

You’ve talked about taking your channel somewhere in Canada. Why does the idea appeal to you, what city would you do it in and how far along are you in bringing this idea to reality?

Ten years ago we moved to South Korea, and it was so different — so foreign, so exotic. And we shared our excitement with anyone who wanted to watch. Now, whenever we go back to Canada to visit our families, we’re surprised at how much our home towns have changed, and how much Toronto has grown and evolved. And we feel a similar sense of awe in our home country now. It’s not something we could have felt without leaving it for as long as we have.

We didn’t appreciate Canada that much when we were living there, because it was just normal for us. Now, we’re yearning to explore Canada like never before. We want to share the awe we have for Canada with our viewers.

At the same time, we’re very different people now, with a much better under-standing of food, travel and video, and we’d love to bring those skills back home, to explore our home country and to let the world know just how cool a place it is. 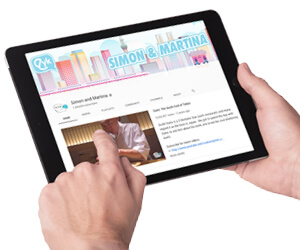 This is just a new idea for us, though, as we’re still fresh to Japan, and there’s a heavy map full of places we have yet to explore, a huge army of brilliant chefs with messages we have yet to share and many more flavours we need to learn to understand.

Our excitement for Japan hasn’t faded at all, and we’re still full steam ahead on making videos here. We want to stay in Japan at least until the Tokyo 2020 Olympic and Paralympic Games. But after that? Who knows. Maybe Canada will take us back, if they’ll have us.

Shopify may be new to Japan, but it’s already making its presence felt