On July 1, the Canadian Chamber of Commerce in Japan (CCCJ) held its 40th Annual General Meeting (AGM) at HyLife Pork Table in Daikanyama. In addition to the group gathered at the restaurant and in keeping with the hybrid format, many attendees gathered online for the proceedings.

This year’s AGM marked a new chapter for the chamber, as it was convened by David Anderson, who had been appointed chamber chair in July. The first item on the agenda was announcing the new members of the Board of Governors. Nine of the 12 candidates were elected to fill all vacant seats. Voter turnout was more impressive this year than last, with 64 per cent of members having cast ballots. 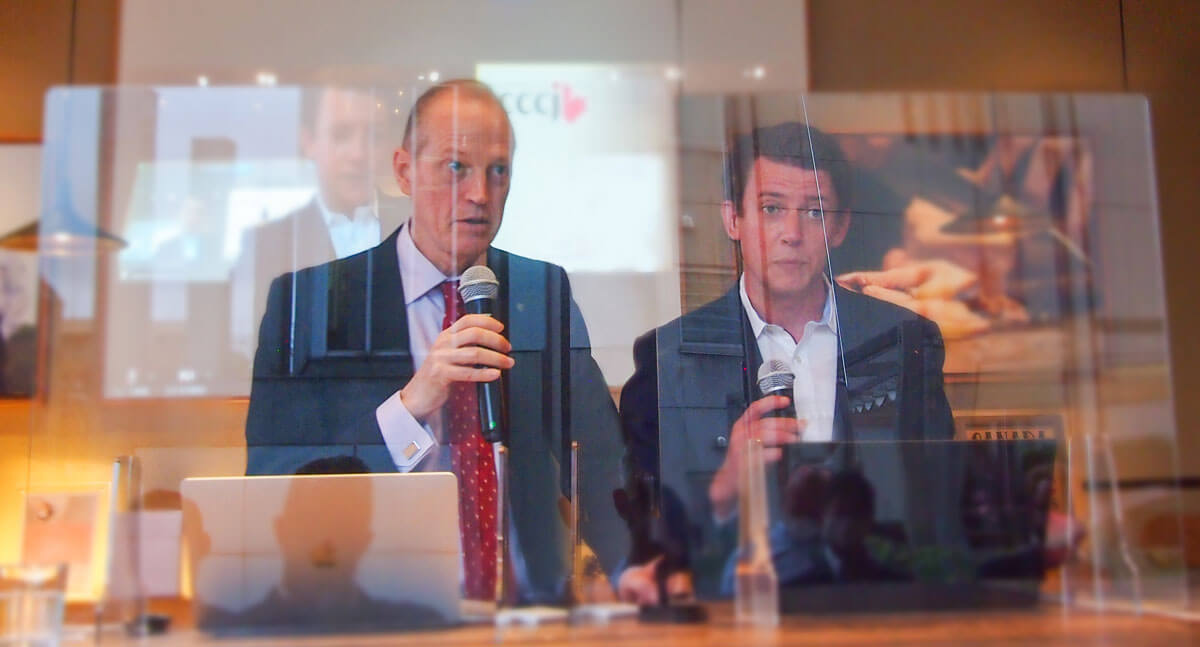 After introducing the new Board, the next item of business was the presentation of the audited financial statements for the 2020–21 fiscal year. They were delivered by Treasurer and Chair of the Financial Administration Committee Gordon Hatton.

As he explained, the past year has been a challenging one for members as well as the chamber. Membership revenue was down 10.7 per cent. And, since it has not been possible during the year to hold the usual revenue-gene-rating occasions — the Gala, the summer networking event, the bonenkai, and in-person speaker events — revenue from these sources was down ¥4.41 million on the year.

However, the chamber has been able to reduce its rent by 10.7 per cent and, due to pandemic-related restrictions, there have been cuts in travel costs, entertainment expenses and outlays for office supplies.

As he had presided over the chamber during the previous fiscal year, Chair Emeritus Neil van Wouw delivered the annual report. He explained that, while the past year had been difficult, the chamber has adapted to the challenges and learned how to succeed. It has been bringing in new members every month, and many of the new members are quickly becoming active in committees.

Van Wouw noted the recent formation of a new committee: the Sustainability Committee. It will be engaged in a number of endeavours in the near future.

Van Wouw added that, even without the ability to host in-person occasions, the chamber had been able to hold close to 30 events over the past year. The vast majority had been online, taken a number of formats — webinars, panels and drop-in discussions — and been able to draw participants from both sides of the Pacific. He predicted that, even when activities return to normal, the chamber will be able to build on what it has learned from arranging these events.

He also touched on how the chamber has been able to provide services for its members, most recently by securing free Covid-19 vaccinations for CCCJ members, 50 of whom had received shots the day before the AGM.

In closing, van Wouw presented Anderson with a ceremonial gift that each chair has pas-sed on to their successor over the years. While the specific name of the object has been lost to history, van Wouw said, he has dubbed it the “two-by-four of leadership.”

Following van Wouw’s remarks, Anderson expressed his appreciation for the outgoing chair’s efforts and support. “I’ve served on the board with Neil for the past four years, the first year as governor and, most recently, serving as vice-chair. During this time, Neil has been a great mentor, leader, listener and friend. Thanks to you, the chamber is definitely in a strong position.”

As the meeting drew to an end, another chamber transition was marked. Anderson welcomed Noriko Ishida as the new executive director of the CCCJ, and bid a warm farewell to Marie Ohashi, who had served as events manager prior to her time as executive director.