Given the challenges facing the aviation sector due to the coronavirus pandemic, the partnership agreement comes as a timely boost to both countries’ industries, and will help member companies be prepared for when commercial aviation rebounds.

The agreement was signed in Montréal in December at the International Aerospace Inno­vation Forum 2020. Suzanne M. Benoît, president of Aéro Montréal, underlined the importance of the historic agreement to both the aviation sector and broader business and industrial links between Québec and Japan.

“This agreement aims to share information about our respective challenges and will facilitate the identification of opportunities to participate in international and local projects and programs, training, conferences and seminars, as well as cooperation opportunities among Japan and Québec companies to support the consolidation of supply chains,” she told The Canadian.

“Japan and Québec are both innovation terri­tories,” she said. “A rapprochement between our two clusters is completely natural.”

The agreement builds on Aéro Montréal’s collaborative arrangement with the European Aerospace Cluster Partnership (EACP) and 30 similar deals with international aerospace clusters. To date, those agreements have led to concrete actions that have promoted business opportunities, including joint missions, business-to-business meetings at international trade shows, the organization of joint events and case study competitions with visits to inter­national manufacturers.

Aéro Montréal and ANAC “share a common vision of supporting the global reach of their industries, know-how, capacity for innovation and growth by encouraging collaboration,” Benoît said, adding that Japan is “an inspiring country for its ability to innovate quickly.”

“In times of crisis, the ability to innovate and reinvent oneself is decisive and international collaboration makes sense,” she said. “By facil­itating the sharing of information and best practices, they nourish industries and enable them to surpass themselves.”

Nagoya and the surrounding Aichi region is the heart of Japan’s aerospace industry, with companies there producing the Mitsubishi Space Jet family of regional jets, many parts of the Boeing 787, as well as a number of space vehicles, including the HIII-A, HIII-B and H3 rockets.

As the heart of the Japanese automotive industry and home of the world’s largest auto­maker, Toyota Motor Corp., the region also boasts many high-quality and world-leading manufacturing companies and represents one of the world’s most important industrial regions. That can be an opportunity for Québec companies wanting to expand in Japan, in Asia or all over the world. 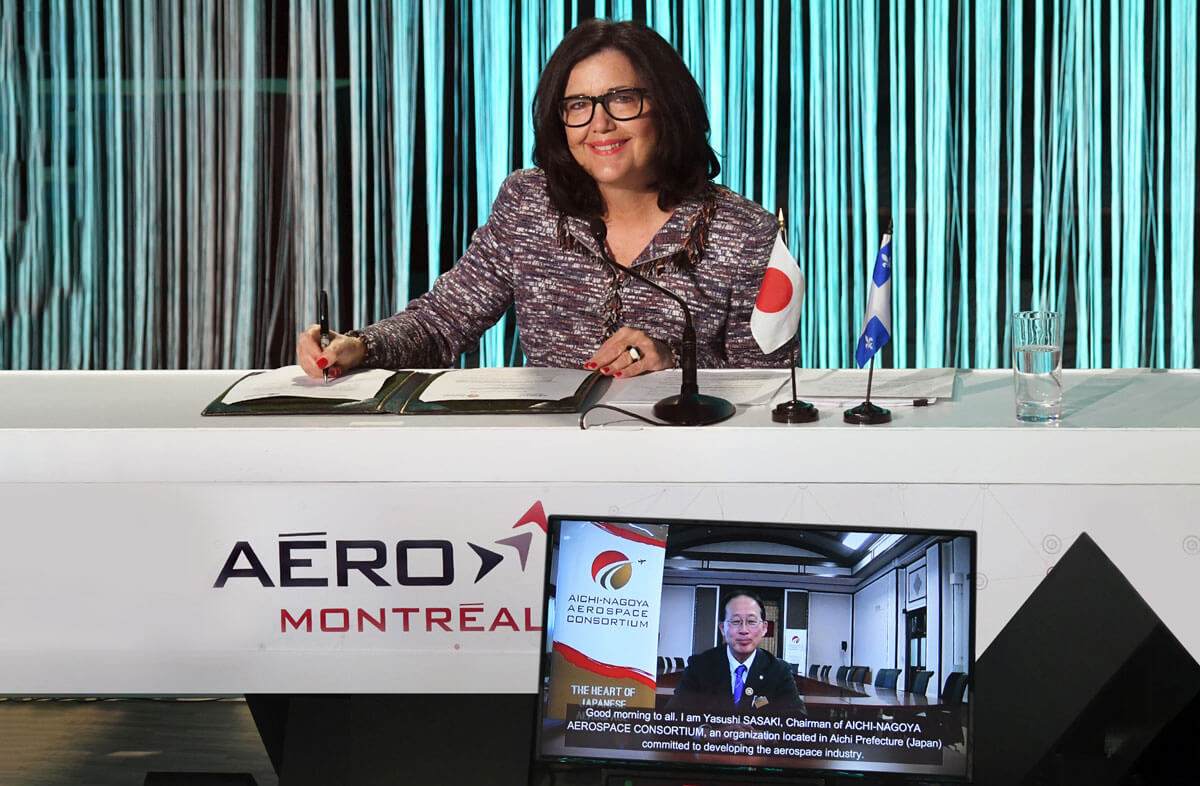 Québec is at the very heart of domestic aero­space research and development activities, with more than 70 per cent of Canadian aero­­space R&D having been carried out in the greater Montréal area in 2018. Benoît said Canadian knowledge and best practices can be a tre­men­dous asset to Japan’s aerospace cluster.

Substantial ties are already in place. Since 1996, Bombardier Aerospace, one of Québec’s leaders in the sector, has had very close business ties with Mitsubishi Heavy Industries in Nagoya, notably for the manufacturing of wings and fuselage for the Global Express business jet. In 2020, Mitsubishi’s acquisition of the CRJ Series Program from Bombardier Inc. strengthened the relationship between the two clusters even more.

“Both organizations have similar objectives for their members and share a strong belief in busi­ness and supply-chain expansion,” said Benoît. “In this context of constant trans­for­ma­tion, the internationalization and diver­si­fi­cation of our companies are essential to their growth. Our small and medium-size enterprises need to cons­tan­tly evolve by reducing their costs and offering increasingly innovative and sust­ain­able products.

“The international collaboration that we are setting up aims to help our members on these subjects,” she added. “Japan, with its leadership in innovation, is definitely a key player with whom we must establish strong and lasting relationships for the benefit of our companies and nations.”

David Brulotte, the delegate general of Québec in Tokyo, said Aéro Montréal and ANAC have been colleagues in the industry for many years, having held discussions in years gone by at events around the world.

“There are definitely strong ties between Nagoya and Montréal, and this agreement crys­tal­lizes the relations between both actors, and will act as a catalyst to forge deeper links between companies from both regions,” he said.

Innovation, Brulotte emphasized, is critical to the aviation sector as it looks to rebuild after the pandemic.

“By the very nature of the sector, interna­tion­alization is key to the growth of companies both from Montréal and Nagoya,” he said. “While regional markets offer good opportunities, the aviation market is indeed global, not only in manufacturing, but also in areas such as servicing, R&D and innovation.

“If a company wants its products and services to have a reach beyond its borders and its domes­tic market, then international cooperation, collaborative innovation and international expansion to foreign markets are some of the most important aspects of being competitive and innovative in a rapidly changing landscape,” Brulotte added.

There are other challenges beyond the difficulties posed by the coronavirus, he said. They include bringing about sustainable development within the air transportation sector. Yet, he believes, the longer-term outlook remains positive.

An industry report commissioned by Boeing has indicated that passenger traffic is projected to increase at an average of 4 per cent per year for the next two decades and the global commercial aircraft fleet is expected to increase to 48,400 units by 2039, up from about 25,900 aircraft today.

During the same period, Asia will continue to expand its share of the global fleet, account­ing for nearly 40 per cent of the world’s aircraft in 2039 compared with about 30 per cent at present.

The new agreement is designed to position Aéro Montréal and ANAC to take advantage of that growth, as also to build on the long history of collaboration between Canada and Japan. According to a statement issued by the Canadian government, in the decade from 2009, Japanese companies invested more than C$12.7 billion and contributed to the creation of nearly 12,000 jobs in Canada. In addition, Canadian companies invested over C$3.8 billion in Japan, where they helped to create some 2,500 jobs.

Japan is also Québec’s second-largest trade partner in Asia; the province hosts almost 100 Japanese companies, which have created some 8,000 jobs there. And the aerospace sector was Québec’s third-largest category of exports to Japan in 2019.

Japan has also welcomed the signing of the deal with Aéro Montréal. In a statement, Yasushi Sasaki, chairman of ANAC, said, “We have high hopes that exchanges between companies and universities involved in the aerospace industries in both regions will be promoted, leading to new innovation and business.”

Benoît is upbeat about the future of the sector. “Covid-19 has had a colossal impact on global economic activity, individuals, orga­ni­zations, governments and travel patterns,” she said. “It has invited people to rethink the way they travel. It has accelerated the shift the aerospace industry was already making to build a more sustainable industry.

“Tomorrow’s aircraft will have to consume less fuel, be lighter, use greener materials and offer passengers comfort that meets stringent health standards,” she added. “To that end, our industry is already mobilizing to build the green aircraft of tomorrow and rethink greener, more connected supply chains.”