The Canadian Chamber of Commerce in Japan (CCCJ) held its 38th Annual General Meeting (AGM) on June 12 at the Embassy of Canada to Japan in Tokyo. During the meeting, members had a chance to find out what had been happening at the CCCJ during the previous year and to learn about plans for the year to come.

Early on in the meeting, the names were announced of the seven elected members of the Board of Governors: Rob Fuller, Ron Huber, Karl Pires, Annamarie Sasagawa, Jackie Steele, Yuko Sudoh and Riyo Whitney. (Profiles of the three first-time governors — Annamarie Sasagawa, Jackie Steele and Riyo Whitney — are on page 31.) As CCCJ Chair Neil van Wouw pointed out, this year’s elections might have been the most closely contested in the chamber’s history. Further, they led to the doubling of women’s representation on the board, from 20 per cent to 40 per cent.

Next up was the presentation of the audited financial statements for the 2018–2019 fiscal year by Greg McDonald, treasurer and chair of the Finance Administration Committee. This AGM marks the final time that McDonald will be acting as treasurer — Gordon Hatton will be taking up the reins.

In the discussion about the CCCJ’s fi­nan­cials, several points stood out: one is that the chamber is in a stronger cash position than it was at the same time last year, and it has a lower set of accounts receivable. The team at the CCCJ office has also been able to reduce administrative expenses, in no small part due to having relocated the office. Finally, the chamber has negotiated an arrangement with the company that runs the CCCJ’s serviced office by which the chamber gets a com­mis­­sion when they refer tenants to serviced apartments also managed by the company.

Van Wouw then delivered his annual report. He began by explaining that the hackathons — informal sessions that new members can drop in on to learn more about how committees work and become involved — are still going strong after two years as they help orientate new members to how things work in the chamber.

Meanwhile, the database put into place last year is helping to cut down membership lapses, while the chamber continues to try to bring new members into the fold. Helping out on that front will be Shawn Lawlor, the new chair of the Membership Committee.

EVENTS ON THE WAY

Rugby World Cup 2019 is just around the corner, and the CCCJ is getting into the spirit of things in a few ways. The chamber, in collaboration with several other foreign chambers of commerce in Japan, has formed the Joint Chamber Rugby Alliance. In addition, an internal Rugby World Cup Committee has been set up, which is being chaired by long-time member and former governor Tad Furuta.

One of the events they have planned will be held in Fukuoka on September 26, when Canada plays its first match, against Italy. The committee is also looking ahead to working with the Iwate Prefecture town of Kamaishi, where the fourth Canada match will be held.

And fans of a great party will be happy to know that plans for the Maple Leaf Gala are now under way. This time around, the Gala Committee has decided to switch things up a bit and, instead of holding the event in early November, when Rugby World Cup 2019 will still be finishing up, they have set the date for February 21, 2020, and the venue will be the fourth floor of the Embassy of Canada to Japan in Tokyo.

Van Wouw closed by reminding all those present how important a role they played in maintaining a strong Canada–Japan relationship, and that they should look forward to great things from the CCCJ in the year to come. 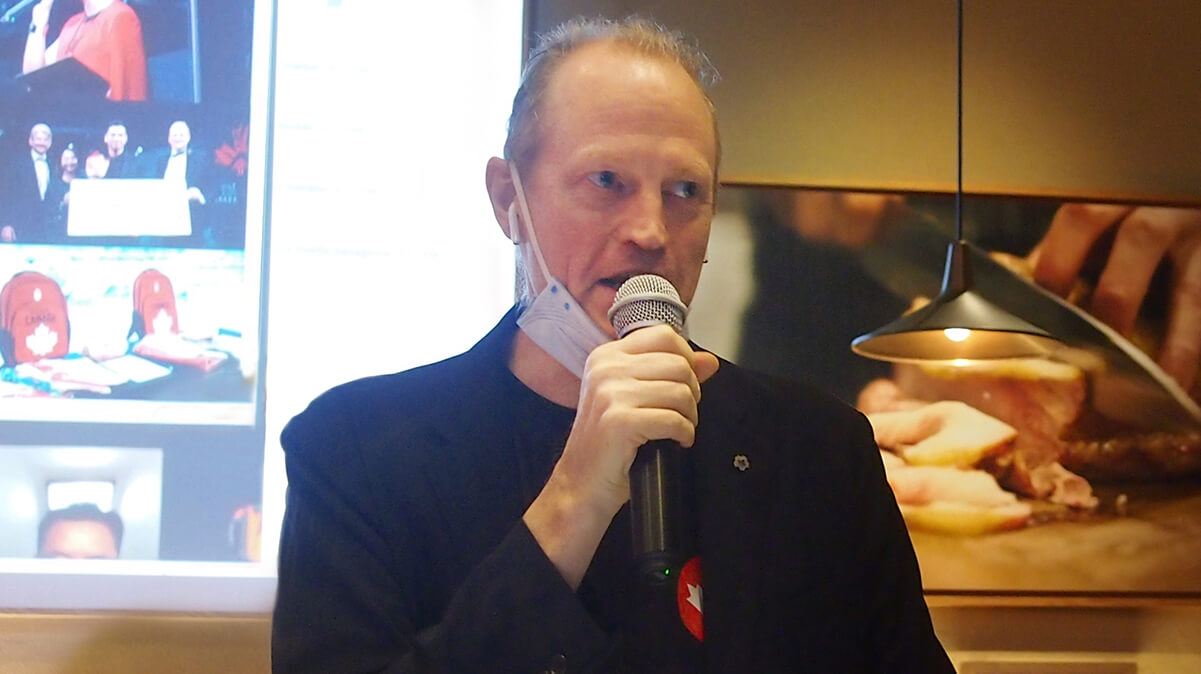 Despite virus, a good year for revenues and committees