When challenges and setbacks arise, you can either get frustrated and see the negative side of things, or recognize that the difficulties that life presents us with usually offer an opportunity to learn.

This is the situation Lowell Sheppard found himself in while preparing for his solo voyage across the Pacific, from Tokyo to Vancouver. Those who have been following him on social media or his YouTube channel already know that Sheppard has decided to postpone the journey until next year.

As he explained to The Canadian, the solo training trips he was making showed him that neither he nor the boat would be ready in 2021, and that he needed to spend the coming year preparing his vessel — and himself.

He considered two options: one was training here. The other was having a Canadian crew come to Japan and then accompany him across the Pacific to Canada, and train there. But bureaucratic hurdles involved with that option led him to decide to stay in Japan.

“There was a lot of emotion over the past two months,” Sheppard admitted. “I just had to face reality. But I had to arrive at that decision myself. Others were saying I wasn’t ready, but I had to take a 30-hour solo trip to understand that. But finally I think my emotion was the same as that of my shore support team — it was one of relief.”

“There was a lot of emotion over the past two months.”

Once he made this decision, a new option pre-sen-ted itself, which was to cruise along coastal Japan and explore its waters and beaches. The idea entranced him, both because of his long-time work with HOPE International Development Agency and his love of the sea. He had explained his basic plan to his followers, but he hadn’t shared yet exactly what he would do until he spoke with us.

“Now, as I’ll be a cruiser, I want to enjoy what’s on land, as well as what’s on the water. So, every harbour they go into, cruisers explore local culture and everything else. Well, one of my favourite things in Japan is onsen, and the variety of waters that you find [there]. And it featured a little bit in my book, Chasing the Cherry Blossom, that the waters are not just used for bathing in Japan. They’re used for nourishing, relaxing, rejuvenating and healing.

“So when I dock, I want to go look for a hot spring. And I will need to always find fresh water, because in the sea there is no fresh water. It’s important for my life for the next two years as I live on the sea to find sources of clean water — and this year, to celebrate the volcanic nature of Japan found in its many hot springs.” 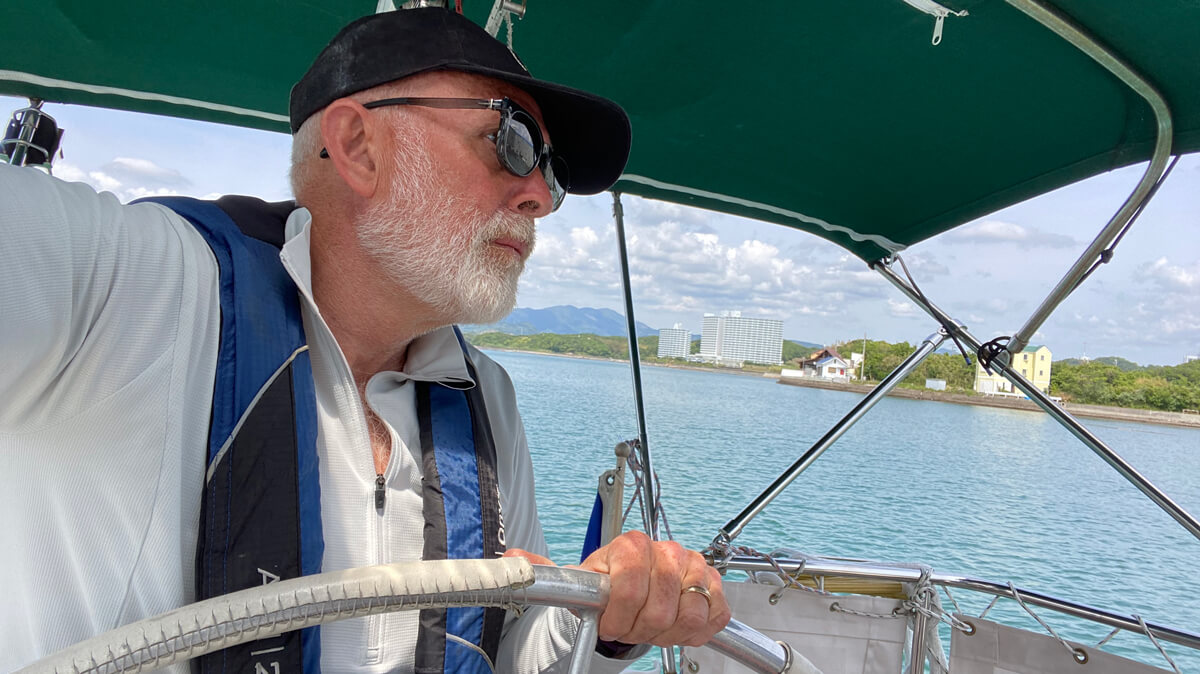 The other part of Sheppard’s plan came about as a result of his research into the Great Pacific Garbage Patch, a floating island of plastic waste. His studies led him to learn about nurdles — microplastic debris that is a by-product of the plastic manufacturing process. These tiny fragments make their way into the environment and constitute a significant component of marine pollution.

One non-governmental organization (NGO) that is working to combat this problem is The Great Nurdle Hunt. The Scotland-based group encourages people around the world to collect nurdles at beaches in their local areas and submit their findings to a database that can then be used as a basis for the NGO to engage in discussions with government and industry that can lead to finding a solution.

As Sheppard explained, by taking part in The Great Nurdle Hunt, his ambitions are modest. “It’s not like I’m launching a campaign to clean up Japanese beaches. I just want to do my part. As a celebrant of beaches, I want to leave the beaches a bit tidier than how I found them — and gather data. For that, I can invite others to join me, find nurdles and send me the data. And I will add that to the Japanese database for the Scottish NGO.”

In a time when we’re all confronting uncertainty, it’s inspirational to see someone take changing situations in stride and find a new way to have adventures, while preparing for an even greater one to come.

Stay up to date with Sheppard’s adventures: www.pacificsolo.com

Expat inspires us to live our dreams