The ongoing Covid-19 quarantine has left many of us with time on our hands. Some people have embarked on new fitness journeys, others have completed chores that they’d put off for months.

For Saya Hatton, this was the perfect time to write her first children’s book, The Alphabet of British Columbian Forests. She recently spoke to The Canadian about her inspiration, and what she hopes children will learn from her book.

Born and raised in Japan and educated at the International School of the Sacred Heart in Tokyo, Hatton recently earned a Bachelor of Science in Forestry from the University of British Columbia. Since graduating during the pandemic this year, Hatton has been applying for master’s degrees while working part-time in Vancouver. During her spare time, she decided to write — and then put her artistic ability to the test by illustrating — a children’s book.

Having not studied art since high school, Hatton explained, the inspiration for the book’s illustrations came after she had bought an iPad to help her study. “During classes I’d be doodling and people started telling me they liked my drawings. So I started to draw more and teach myself how to use the different applications.” Hatton’s simplistic art style is inspired by the illustrations in Sarah Andersen’s book, Adulthood Is a Myth: A Sarah’s Scribbles Collection, which she had recently received from a friend. “It’s the kind of content people like, so I thought it’s okay to have simpler drawings … and I got confidence from that.”

“I never imagined that I would spend the months after graduating illustrating a children’s book,” she explained, and went on to encourage those looking to embark on their own creative projects. “If you have the time and it’s something you enjoy doing, then try it. If it doesn’t work, that’s okay. But at least you know you tried it!” 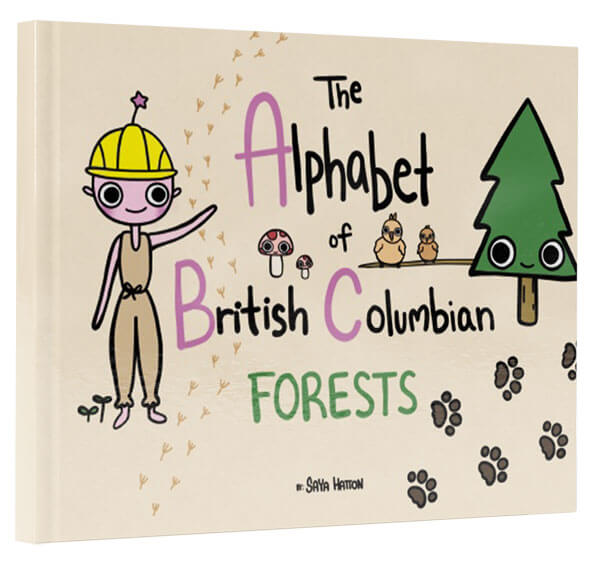 The book features large-font letters of the alphabet, each letter representing a native species of flora or fauna to be found in the forests of British Columbia. Readers can go through the alphabet with the forester Sylvie, named after the practice of silviculture — the control of the establishment, growth, composition and health of forests. “Having Sylvie guide you through the forest, is a way of showing kids that there is such a job as that of a forester, and that one can be a steward of the forest environment.”

Hatton wants to use the book to encourage young readers, as well as their parents, to learn more about the environment that surrounds them: “I wanted to use the whole province [of British Columbia] and make a book that children could use to learn about their own province, identify their surrounding areas and understand their environment better.”

“I wanted to … make a book that children could use to learn about their own province.”

When speaking about her hopes for the book, Hatton mentioned other lessons that she would like children and parents to learn from it. “I hope that both parents and kids become more aware of their environment. To be honest, when I was young I really didn’t know that there were so many species of trees and so many things you can discover, even in a small area. I hope that it will make [children] more curious about this. Maybe in the future, kids will do something about protecting trees, or live their lives in ways that care for the environment.”

The Alphabet of British Columbian Forests is available as an e-book, found on both Apple Books and lulu.com. The latter site also offers a hard copy version of the book.

We have two copies of The Alphabet of British Columbian Forests to give away.
Email publisher@custom-media.com for a chance to win.

Expat inspires us to live our dreams

Lowell Sheppard prepares for a great adventure amidst smaller ones